You are here: Home Special Reports
By Rajiv Shah
Rural Punjab may be richer compared to the rest of India’s rural areas, but a recent study has raised the alarm that, except for big farmers, all other categories – marginal, small, semi-medium and medium in accordance with their farmsize – are forced to spend more than what they actually earn. Titled “Levels of Living of Farmers and Agricultural Labourers in Rural Punjab”, the study insists, the result is, “Large sections of the farm households have been facing a great deal of distress and increased debt burden.”
Carried out by mainly by Punjabi University scholars Gian Singh, Anupama, Rupinder Kaur and Gurinder Kaur, and Sukhveer Kaur of the Dashmesh Khalsa College, Zirakpur, and published in the “Journal of Rural Development”, National Institute of Rural Development and Panchayati Raj, Hyderabad, the study states that “average propensity to consume comes to 1.15 for an average farm household”, suggesting that their income less than their spending.
According to the study, the propensity to consume is the highest (1.35) among the marginal farm-size category, and decreases as farm-size increases. Thus, it says, “An average household incurs an annual deficit of Rs 43,940.95. The highest deficit of Rs 64,459.08 is incurred by the small farmsize category, followed by the marginal, semi-medium and medium farm-size categories.” It underlines, only “the large farm-size category has a surplus of Rs 66,533.35.”
As for the farm workers,the average propensity to consume per household comes to 1.12, with an average agricultural labour household incurring an annual deficit of Rs 9,427.17. “This”, states the study, “Implies that agricultural labour households try to maintain a minimum level of consumption and whether they can afford it or not.” The result is, an average amount of debt per agricultural labour household comes to Rs 54,709.30.
Based on a primary survey in three Punjab districts, Mansa, Ludhiana and Hoshiarpur with a sample size of 1,007 farm households and 301 agricultural labour households in 27 villages, the study shows that the annual income earned is Rs 1,39,365.27, Rs 2,22,992.32, Rs 3,69,432.68, Rs 5,66,407.60 and Rs 12,02,780.38 for each household with marginal, small, semi-medium, medium and large farm-size categories, and Rs 81,452.17 for an agricultural labour household.
However, when it comes to consumption expenditure, the households belonging to the large farm-size category record it at Rs 11,36,247.03, which is less than the income. On the other hand, it says, “The annual consumption expenditure for the marginal, small, semi-medium and medium farm-size categories has been recorded at Rs 1,88,523.14, Rs 2,87,451.40, Rs 4,05,573.08 and Rs 5,97,275.52, respectively”. As for an average agricultural labour household, it is Rs 90,897.37. 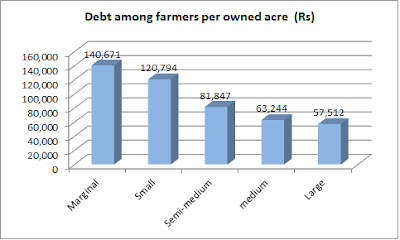 “When being a migrant worker became a curse”