You are here: Home Open Page

In an amusing opinion piece in “Washington Post” (WP), former “Tehelka” journalist Rana Ayyub  – whose book on Gujarat riots, “Gujarat Files: Anatomy of a Cover Up”, based on her undercover operations with government officials as a documentary filmmaker, made her famous – has blamed three Bollywood Khans, but most notably Saif Ali Khan, for playing an “off-screen role, enabling the worst impulses of the government.”

The WP opinion piece seemed amusing to me, because, it is doubtful if highly well-informed journalist Ayub wasn’t in know of what was happening in Bollywood, though she lives in Mumbai. There is reason to wonder: When the WP piece appeared, there were no ripples of unease in the Bollywood over the police clampdown.

Referring to “police vandalism and brutality” on anti-Citizenship Amendment Act (CAA) protesters, especially in Uttar Pradesh, which led to several deaths, Ayub said in the opinion piece, titled “As repression in India gets worse, notable figures remain silent”, that despite the clampdown, Saif Ali Khan along with two other Khans – Aamir Khan and Shahrukh Khan — “have been playing it safe.”

Confining the notable names to only on three Khans, Ayub said, ever since Modi assumed power, several filmmakers “have been bending over backward to please the Indian right wing”, trying to show how the “kohl-eyed Muslim ruler whose debauched gaze preys on Indian Hindu women, or the evil Muslim sultanate wants to pull India away from its magnanimous Hindu supremacy.”

Giving the instance of a new film, “Tanhaji,” which has Ajay Devgn, a Modi supporter, as the lead actor playing “a Hindu warrior of the 17th century who has to protect Hindu pride from Muslim rulers who seek hegemony over India”, Ayub said, Saif Ali Khan, a Muslim, played “a key role in the film” — even as playing “another important role off-screen, enabling the worst impulses of the government.”

She noted, “His decision to look away from the abuses is demoralizing. While people from across the country mobilized to protect the rights of Muslims, Khan played it safe, saying he was ignorant about the citizenship bill”, suggesting, this hasn’t happened for the first time – he has “offered cover to Modi before” also.

Ayub regretted, “Others have chosen the same path, including the icons Shahrukh Khan and Aamir Khan. Both have been threatened by BJP leaders in the past over their opinions of the intolerance in India. However, neither of the superstars has commented on the current nationwide protests.”

Ayub quoted a director who has worked closely with Shahrukh Khan as saying that he is stunned at the hypocrisy. “They are worried about their business, about their films getting adversely affected should they critique the government,” the director says, adding, “What bothers me is that Shahrukh himself is an alumnus of Jamia Millia Islamia, where the first crackdown was unleashed by this government.”

Ayub’s WP opinion piece, ironically, came amidst the rattled Modi government’s sharp lobbying with Bollywood stars to garner support for the Citizenship Amendment Act (CAA) and the National Register of Citizens (NRC) even as anti-CAA-NRC demonstrations continued across India, and a masked mob seeking to brutalise students and teachers at the Jawaharlal Nehru University (JNU), New Delhi.

The text of the invite for meeting read: “The agenda of the meeting will be to facilitate a discussion on myths and realities pertaining to the Citizenship Amendment Act.”

The invite was sent to other bigwigs of the industry, including Javed Akhtar, Farhan Akhtar, Richa Chadha, Kabir Khan and Karan Johar, but none of them turned up for the meeting, say reports. The invite was not extended to actor Swara Bhasker, filmmakers Anubhav Sinha and Anurag Kashyap — all of whom have been vocal about their stand against the controversial citizenship law.

Alia Bhatt went out of the way to tweet, “To members of my supposed ‘fraternity’ who were meant to opine and dine with the ruling party this evening – trust you implored them to curtail the violence unfolding across the nation. Or at the very least, as part of the ‘scrumptious’ meal on offer,help yourselves to some humble pie.”

A few of the Bollywood stars even took part in the protest against the mob attack on JNU students and teachers (see photograph below). 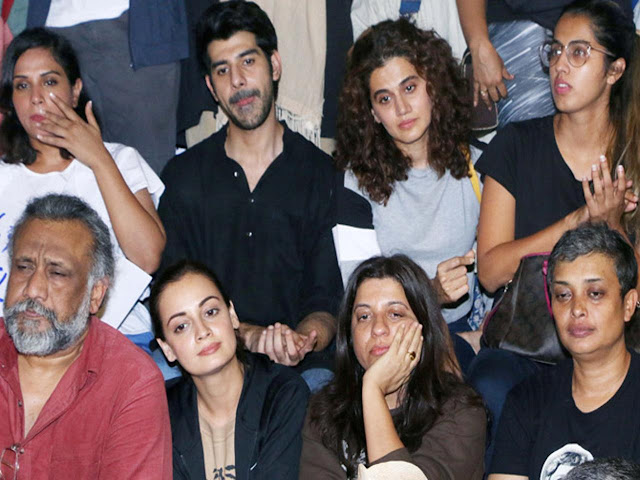 Interestingly, the day Ayub’s opinion piece appeared in WP, members of “creative and scholarly community” – Mira Nair, Amitav Ghosh, Nandita Das, Naseeruddin Shah, TM Krishna, K Satchidanandan, Githa Hariharan, Homi Bhabha, Anand Patwardhan and Damodar Mauzo – floated a draft statement against CAA-NRC-NPR and the brutal crackdown on protesters across the country, stating it will be released the Republic Day.
Asking other cultural personalities to support the statement, and send a confirmation email to indianwritersforum@gmail.com, it is not whether the draft open statement would be revised following the attack on JNU students.

We are artists, filmmakers, writers and scholars. Our work reflects people’s lives, struggles and hopes. We offer our dreams to everyone. But what dream can show us the way in the midst of the present nightmare?
Our vision for this nation demands that we speak up now, in the name of our democracy and the constitution that protects it.

We stand in solidarity with the students and others who are protesting and speaking out against the Citizenship Amendment Act (CAA) and against the National Register of Citizens (NRC). We salute their collective cry for upholding the principles of the Constitution of India, with its promise of a plural and diverse society. We are aware that we have not always lived up to that promise, and many of us have too often remained silent in the face of injustice. The gravity of this moment demands that each of us stand for our principles.
The policies and actions of the present government, passed quickly through parliament and without opportunity for public dissent or open discussion, are antithetical to the principle of a secular, inclusive nation.

Enough is enough. Those of us who have been quiet in the past, our silence ends now. We will be clear-sighted in our dissent

The soul of the nation is threatened. The livelihoods and statehoods of millions of our fellow Indians are at stake. Under the NRC, anyone unable to produce documentation (which, in many cases, does not exist) to prove their ancestry may be rendered stateless. Those deemed “illegal” through the NRC may be eligible for citizenship under the CAA, unless they are Muslim.

Contrary to the stated objective of the government, this does not appear to be a benign legislation, only meant to shelter persecuted minorities. The list of exclusions seems to indicate otherwise. Why are minorities from other neighbours like Sri Lanka, China and Myanmar excluded? Is it because the ruling powers in these latter countries are not Muslim?
It appears that the legislation believes that only Muslim governments can be perpetrators of religious persecution. Why exclude the most persecuted minorities in the region, the Rohingya of Myanmar or the Uighurs of China? This legislation only acknowledges Muslim perpetrators, never Muslim victims. The aim is transparent: Muslims are the unwelcome Other.
This is state-sanctioned religious persecution, and we will not condone it.
In Assam and the Northeast, and in Kashmir, the indigenous identity and livelihood is threatened as never before, and we will not condone it.
The response of the government and law-enforcement agencies to the distress of its citizens has been callous and high-handed. India has seen the most Internet shutdowns of any democracy in the world. Police brutality has left hundreds injured, including many students from Jamia Millia Islamia and Aligarh Muslim University. Several citizens have been killed while protesting. Many more have been placed in preventive detention. Section 144 has been imposed in numerous states to curb protests.
We need look no further than Kashmir to see how far this government is willing to go to suppress democratic dissent. Indian-occupied Kashmir is now living under the longest Internet shutdown ever imposed by a democratic government.
Enough is enough.
Those of us who have been quiet in the past, our silence ends now. We will be clear-sighted in our dissent. Like our freedom fighters before us, we stand for a secular and inclusive vision of India. We stand with those who bravely oppose anti-Muslim and divisive policies. We stand with those who stand up for democracy. We will be with you on our streets and across all our platforms. We are in solidarity.
Post Views: 18

Lipstick – and an Iron Will – under my burqa

J&K continues to be haunted, as parts of India ‘degenerate’ into quasi-Kashmir situation

No children be sent to detention camps in Assam!